Today we are sharing a flavorful Cinnamon Roll Layer cake that has the perfect balance of cinnamon and brown sugar flavor along with an amazing cinnamon cream cheese frosting! It is sure to become a family favorite.

This moist cake is everything that you love about the flavor of a cinnamon roll, in cake form! If you love cinnamon cake, you cannot go wrong with this recipe- it is SO good. 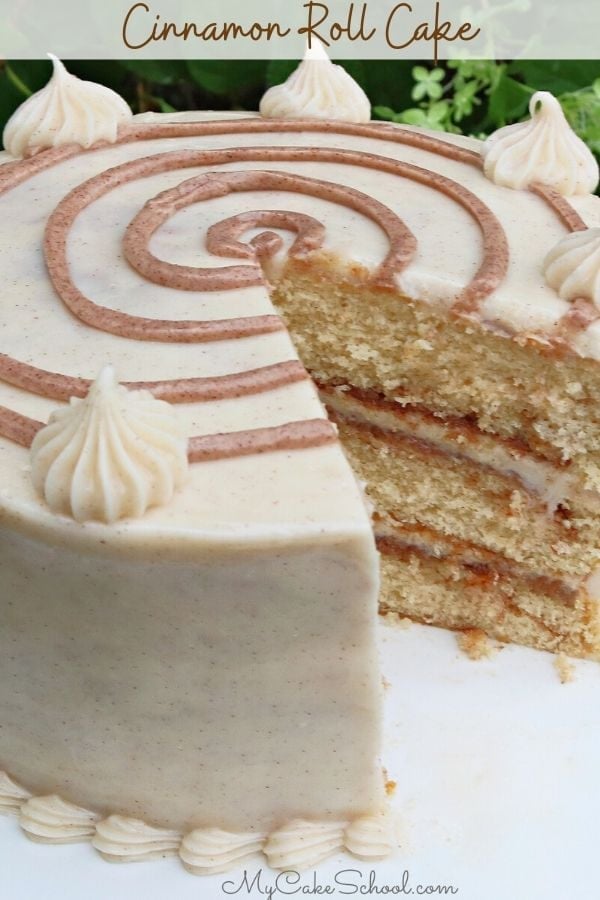 How to Make a Cinnamon Roll Layer Cake

This delicious layer cake is based on our Vanilla Buttermilk cake, but with the addition of cinnamon and brown sugar, and the layers are brushed with a cinnamon simple syrup for an added flavor boost!

*You can find the full recipe further down in this post. Here is a quick rundown of our steps:

When you are ready to assemble your cake layers, brush each layer with about two tablespoons of the Cinnamon and Sugar Glaze/Simple Syrup. We used a silicone pastry brush for this step. 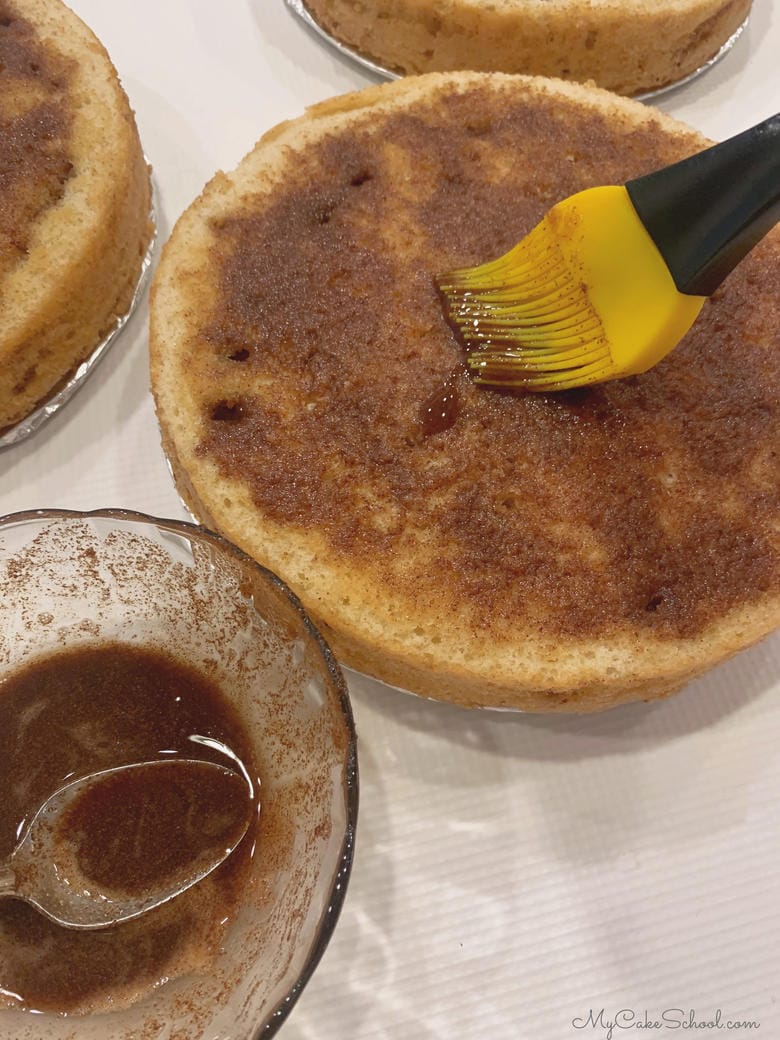 Stack and Fill the Cake Layers

Then proceed with stacking and filling between the layers with Cinnamon Cream Cheese Frosting. This recipe is so easy to make and has a hint of tanginess that pairs wonderfully with the sweet, spiced flavors of the cake layers.

Simply spread each cake layer with the cinnamon cream cheese frosting (after glazing the cake layer) are repeat. 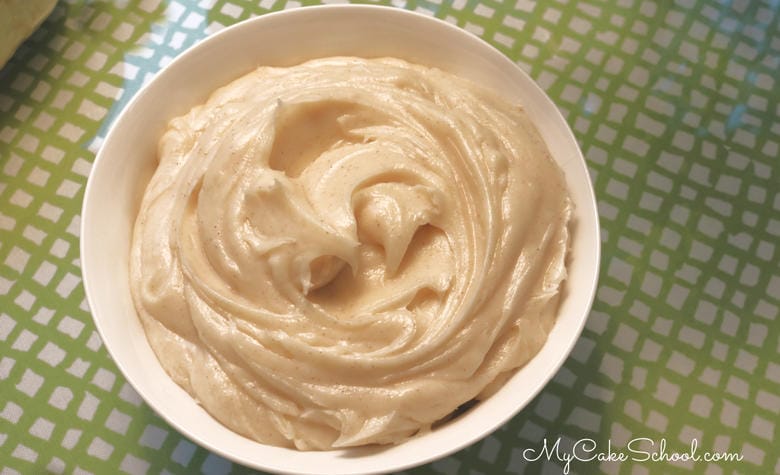 Settling the cinnamon roll cake is a step that is optional, but one that I always try to make time for. The idea is that once assembled, all cakes will settle a little over time.

If you've already applied the final coat of frosting, settling can be frustrating as it often results in small but noticeable bulges around the sides of the cake in between cake layers.

Settling the Cinnamon Roll Cake with a Small Weight

In order to prevent a cake from settling later, it is a good idea to wrap your filled, unfrosted cake tier in plastic wrap and place a weight of some sort on top. We are settling the cake in advance.

The weight could be a smallish book, a couple of cake pans, or anything else that would lend a slight, steady (not crushing) pressure over the top of the cake tier.

Settle the cinnamon roll cake for a few hours or overnight--in this case, in the refrigerator since cream cheese frostings are perishable. 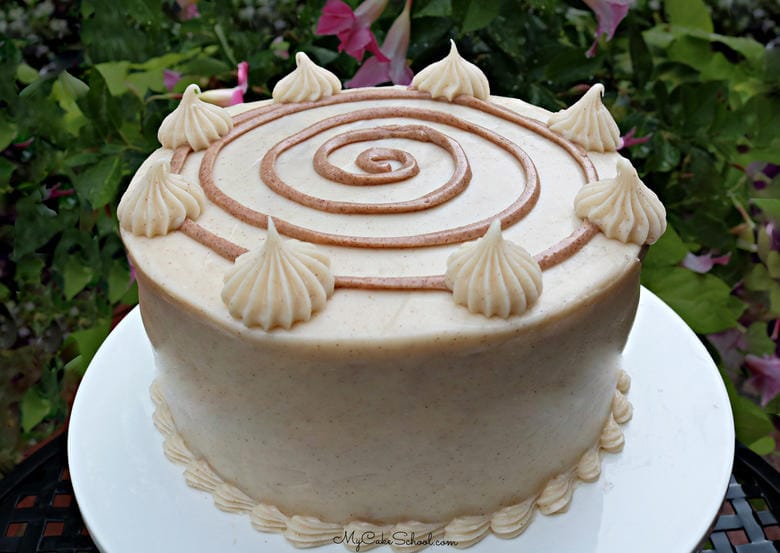 I reserved about ¼-1/2 cup of my frosting to be used for the darker brown swirl on top later. I frosted the settled cake tier with a thin crumb coat, and then followed up with my final layer of frosting.

Smoothing the Frosting around the Sides of the Cake

I find it helpful to place the cake on a turntable when frosting the cake .Then, I spin the cake as I hold my bench scraper (or offset spatula) against the frosted sides in order to make it smooth.

For an extra smooth finish, chill the tier in the freezer for about 15 minutes (or longer in the refrigerator) and use a heated bench scraper or spatula to glide over the frosting.

You can add a bit of fresh frosting to the cake here and there as needed. The heat just barely melts the top layer of frosting, which smooths away imperfections.

This idea of smoothing a chilled cake with a heated spatula or bench scraper is called the hot knife method. To heat the metal bench scraper or spatula, simply run it under very hot water and dry it off before applying to the cake.

We love this simple method for smoothing frosting. You can find more details on this in our free video: Hot Knife Method of Smoothing Frosting.

Applying the Spiral on Top of the Cinnamon Roll Cake

Finally for the cinnamon swirl on top, I added additional cinnamon to the reserved frosting to darken it, loaded it into my piping bag and snipped the end away.

Then, starting in top-center of the cake, I created a spiral with my piping bag filled with the cinnamon swirl mixture. I also added a french tip border around the top, and a small shell border around the base. (For more details on piping a shell border, see our Star Tip Piping Basics Video Tutorial!) 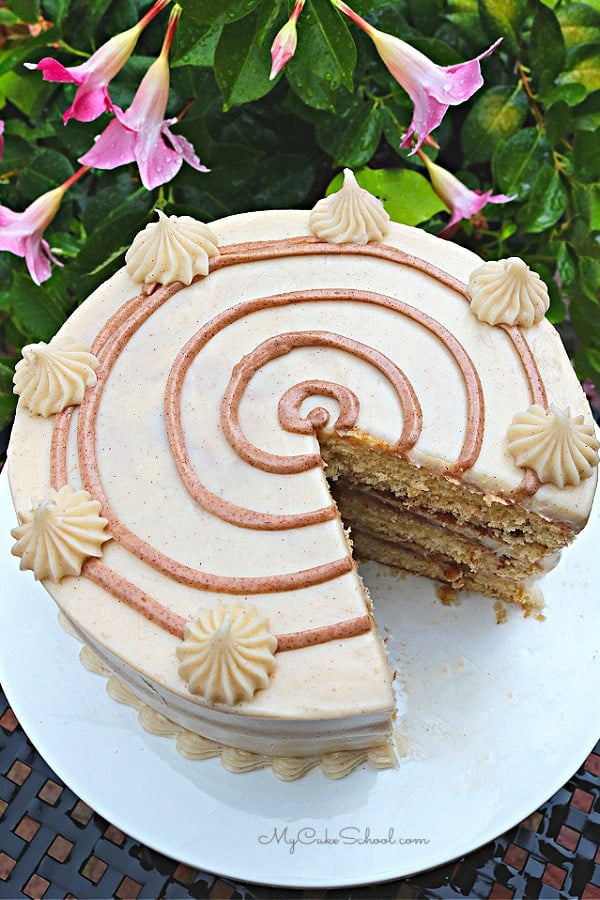 Does Cinnamon Roll Cake Need to Be Refrigerated?

Yes, since our Cinnamon Roll Cake is frosted with Cinnamon Cream Cheese Frosting, the cake needs to be refrigerated.

We love cinnamon cakes and spice cakes! We've added several of these recipes to our Recipes Section over the years- give them a try! You won't be disappointed ;0) 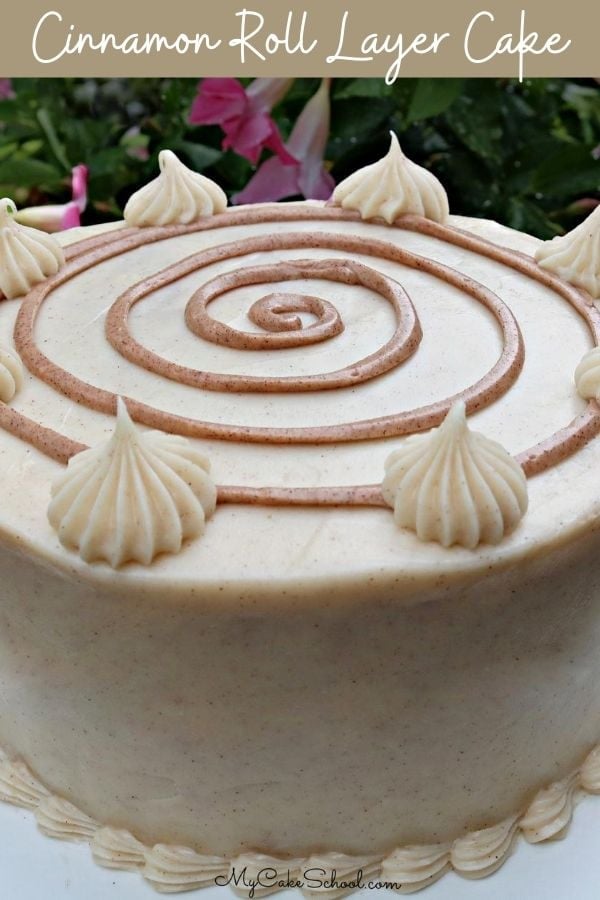 If you love cinnamon desserts but prefer to work with cake mixes rather than baking from scratch, you are in luck!

This easy Cinnamon Roll Cake which starts from a box of yellow cake mix is so moist and delicious. You can find it here: Cinnamon Roll Cake- Doctored Cake Mix Recipe. Keep this moist, easy cake recipe in mind the next time your cinnamon roll cravings strike ;0)

Thanks so much for stopping by! We hope that you enjoy this delicious Cinnamon Roll Cake! If you give it a try, we would love for you to leave a comment and photo below.

Whether you try this recipe for a birthday cake, potluck, or just as something to enjoy with your morning coffee, we hope that you enjoy it!

For Sprinkling over Batter

For the Cinnamon Sugar Glaze for top of each Baked Layer

For the Cinnamon Cream Cheese Frosting

Mix the cinnamon into the reserved ¼ cup of frosting. Adjust cinnamon amount to your liking, this amount gave us a nice darker color (and flavor).

Load into a piping bag with the tip snipped away (or you can use a small round tip) and pipe the swirl onto the top of the cake.

After baking the cake layers, brush with the cinnamon sugar glaze (as instructed above), and fill and frost with the Cinnamon Cream Cheese Frosting. If the frosting becomes too soft to easily frost with, chill in the refrigerator. I also like to chill my crumb coated cake in the freezer for about 15 minutes or so to firm things up before applying the final coat of frosting.

Optional: I then piped a swirl of the darker Cinnamon Cream Cheese Frosting for added decoration. I held the piping bag (tip snipped away) vertically and started piping in the center of the cake and spiraled outward.

I finished things off with french tip piping around the edges (using a tip 8B)- You can use any large star tip for this. I also piped a bottom shell border using a star tip 21.

Substitute for Buttermilk: No Buttermilk? Here is a substitution: To a measuring cup, add 1 Tablespoons vinegar or lemon juice. Add milk to the 1 ¼ mark, stir. Wait 5 minutes and it is ready to use.

Don’t miss our full collection of tried and true cake and frosting recipes from our Recipes Section!

If you are interested in cake decorating, we have hundreds of free cake decorating tutorials for you! You can find them in our Free Cake Videos Section and our Cake Blog Tutorials section.