In this quick & easy tutorial, I'm going to show you how to make CUTE leopard print cupcakes by creating leopard print buttercream and cupcake toppers! 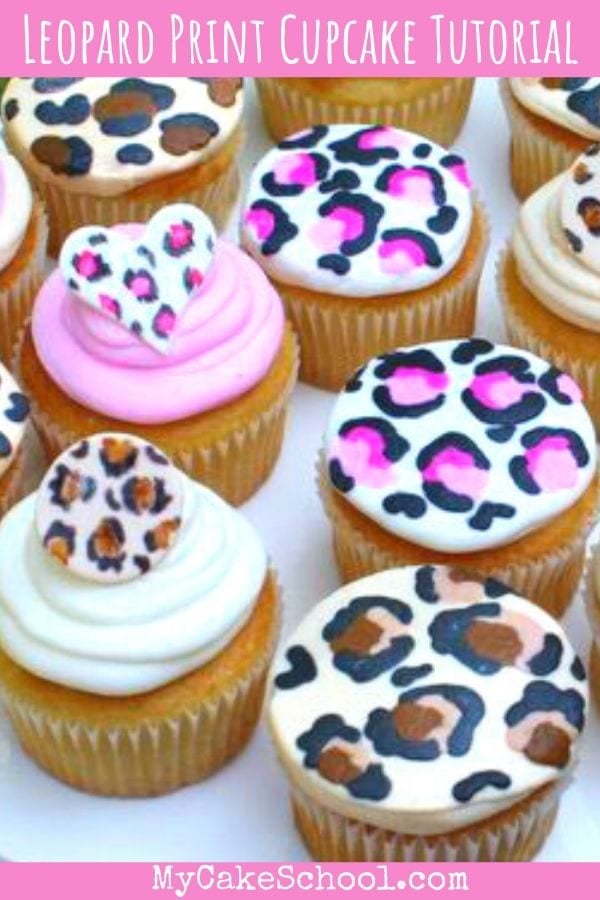 Who doesn't love a good animal print?  Maybe I've been watching too many episodes of the Real Housewives lately (everyone seems to be walking around in leopard this season!) --but I decided that today was the perfect day to jump into the wonderful world of leopard print cupcakes!!!

I know that I say this a lot...but these adorable leopard print buttercream cupcakes really are not as hard as you would think to pull off! 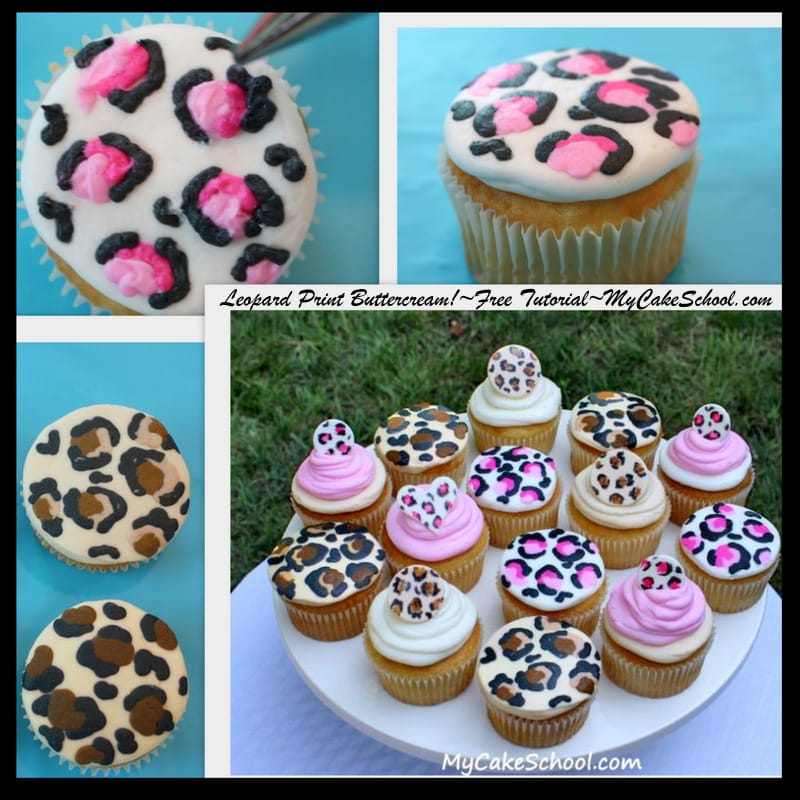 Let's get started on our cupcakes!

First, I started with various shades of crusting vanilla buttercream.  (If you will be using the "Viva Paper Towel method" of smoothing as we are today, you'll want your frosting to crust.) 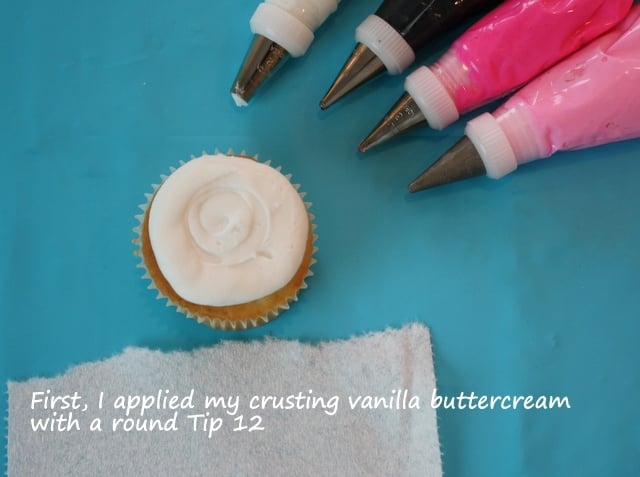 Allow to sit for about 3-5 minutes or until you can lightly touch the frosting without any coming off. The buttercream should develop a light crust. Then it's time to smooth! We like to use Viva brand paper towels because they do not have any quilting or impressions. 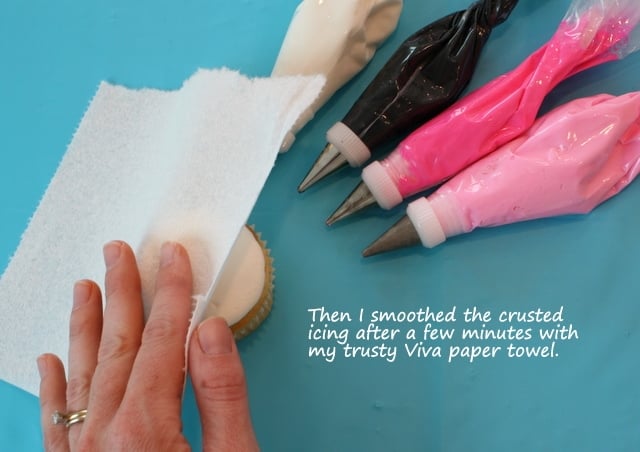 Next, apply some pink spots of buttercream to your cupcakes with a small round piping tip. (I'm using a Wilton 4) 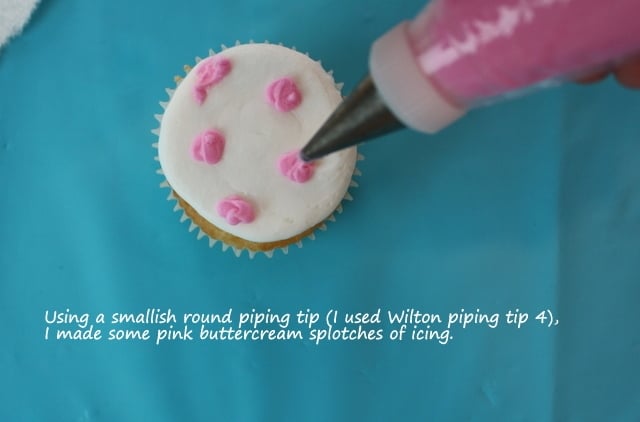 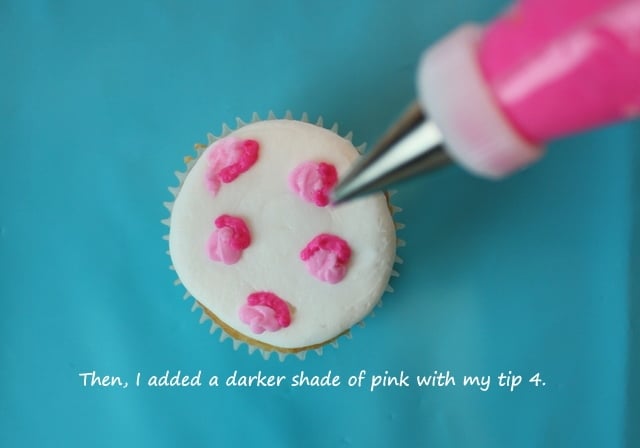 Next, a few black buttercream accents. You can see that I outlined the spots almost entirely, but not quite. Then, I added a few random black markings here and there. This cupcake is getting it's leopard spots before our very eyes ;0) -

*I wanted to mention that if you are working with a non-crusting buttercream, or if you just don't want to smooth your cupcakes, this pattern still looks great with texture!

Since I'm working with a crusting buttercream, I'm going with a smooth look but both options work perfectly. 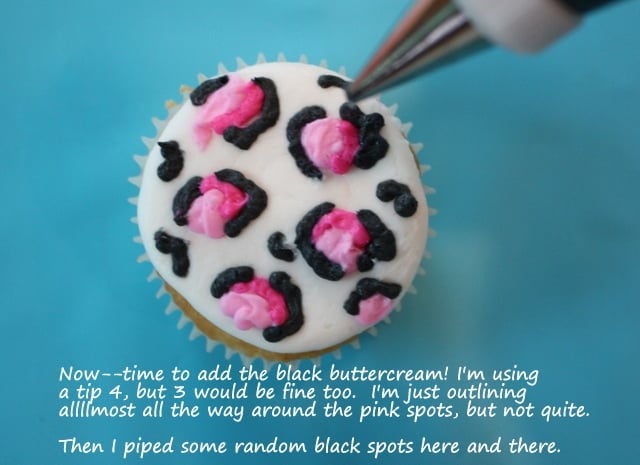 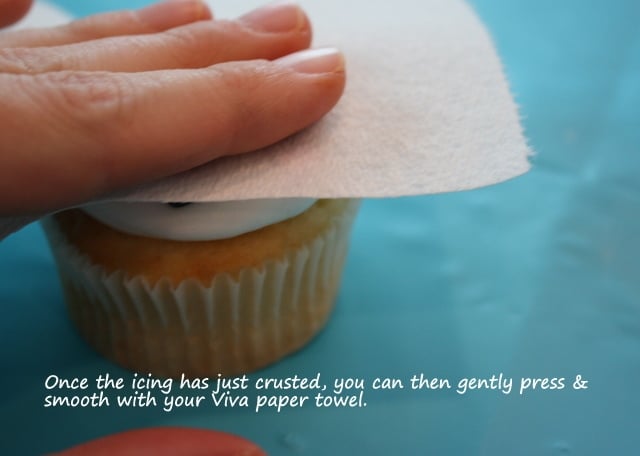 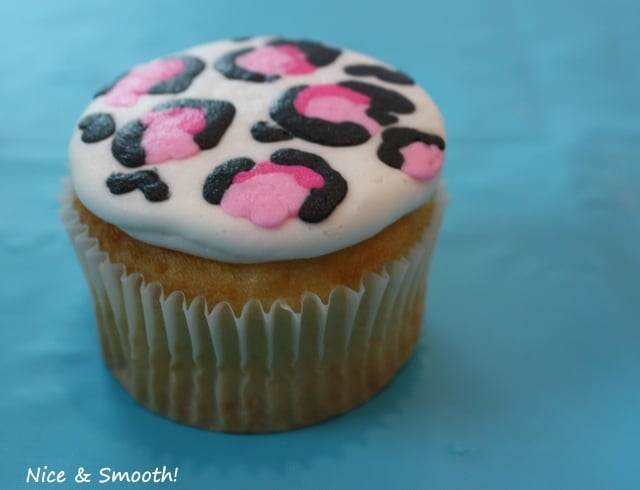 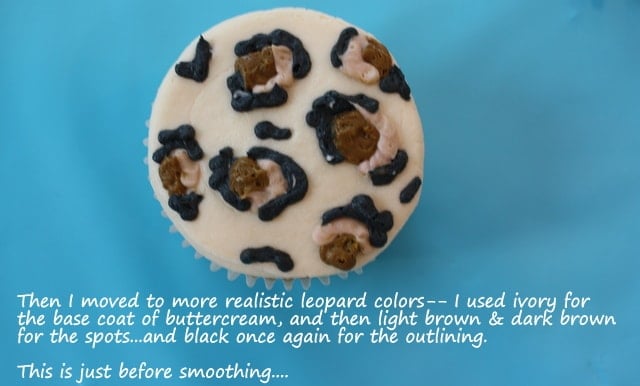 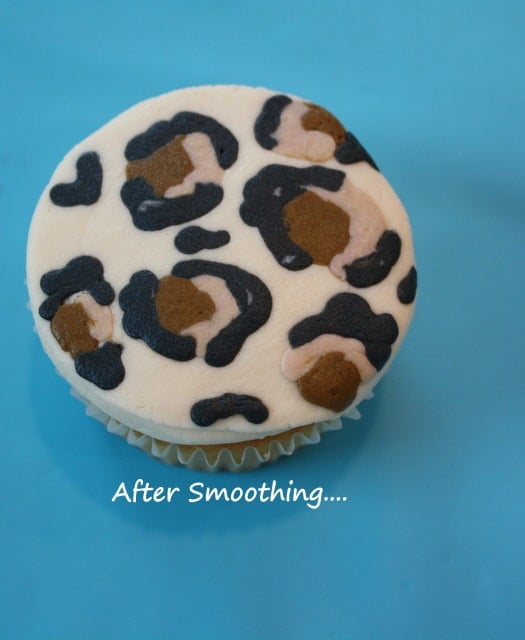 Here's a look at the difference between using three accent colors vs. two accent colors. I like both designs! Just go with what works best for you. 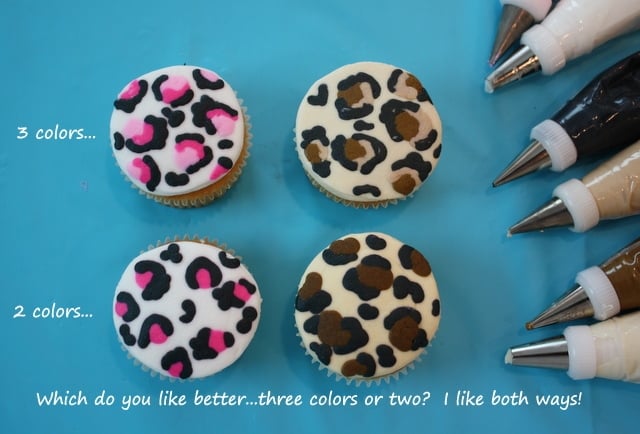 (You can knead a little tylose or cmc powder into your fondant to make them dry firmer if you'd like! I prefer to add them just before the event.) 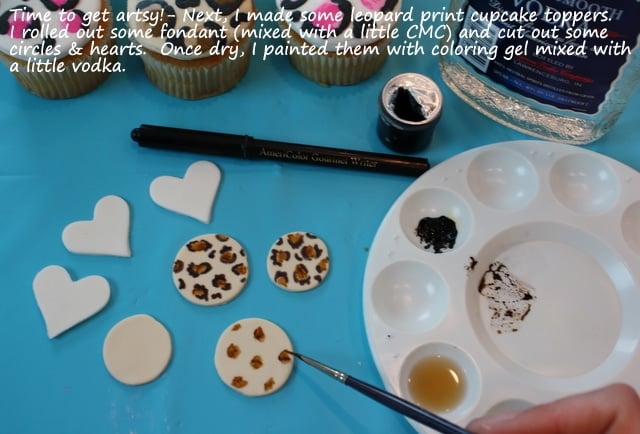 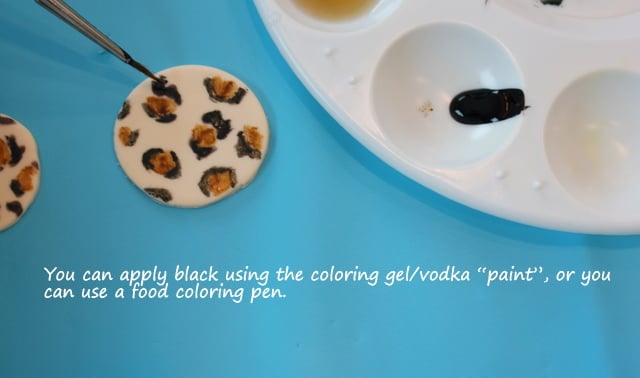 And finally....here's the entire platter! I love these cupcakes.  They are so much fun to make, and would be perfect for jungle or safari themed parties, fashion themes,  "Wild About You" themes or even "Born to Be Wild" baby showers! 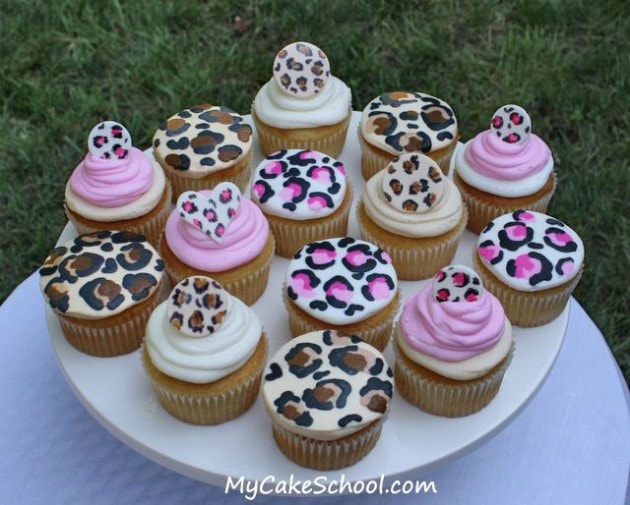 Isn't it nice when we can find a pattern that kids and adults will love?! Make sure to scroll below for a few notes about our favorite crusting buttercream recipes. Thanks for stopping by! 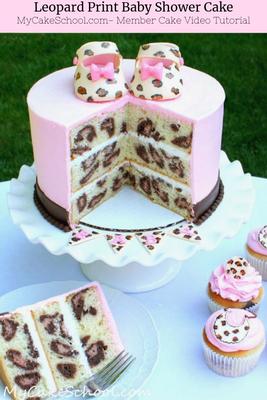 Add a little tylose powder to your fondant if you have any for faster drying. Roll the fondant to about ⅛ inch thickness and cut out your shapes. You can use the round end of a large piping tip for circles if you'd like. 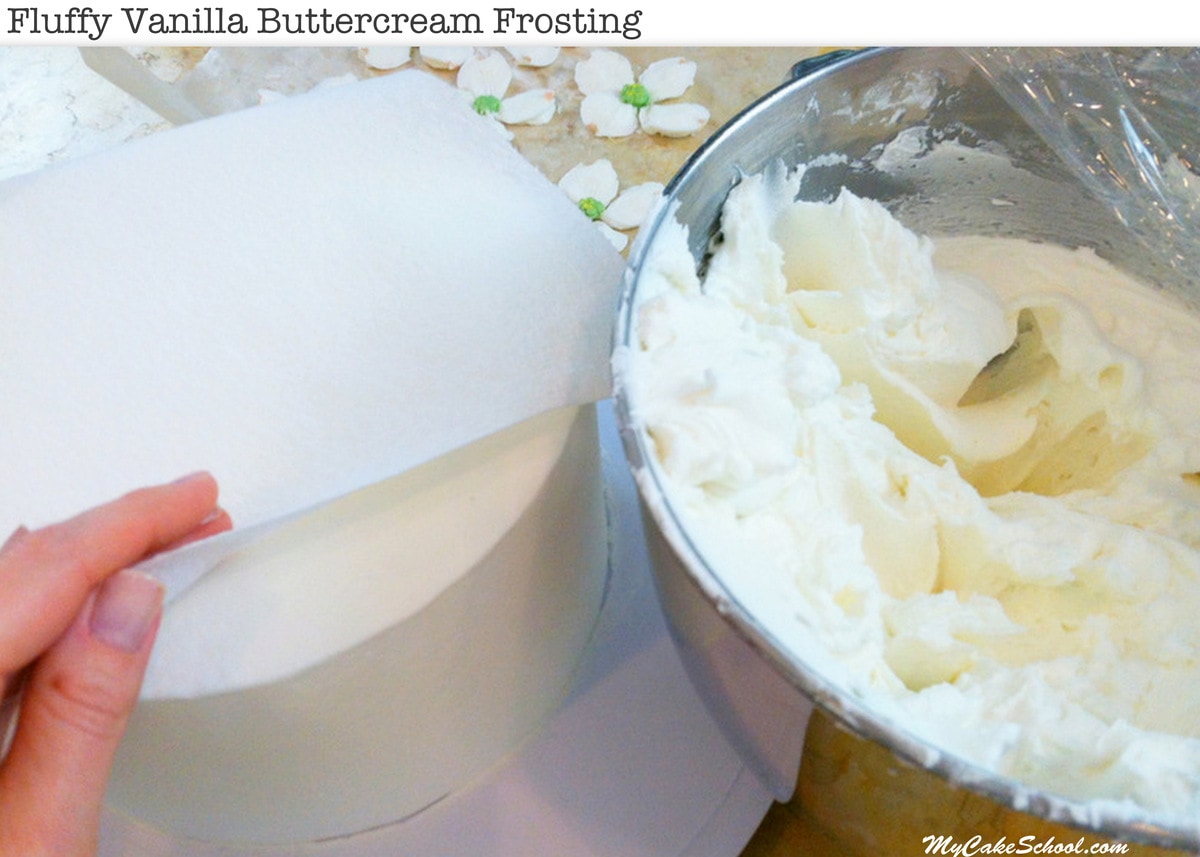 Looking for even more animal print cupcake cuteness? Check out this fun and easy "Wild About You" step by step cupcake tutorial: 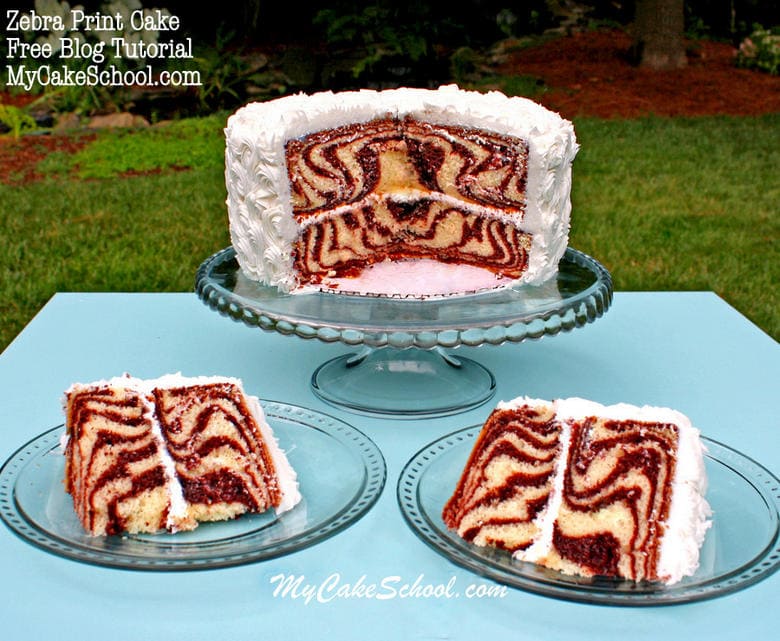 « Quilling with Fondant & Gum Paste
How to Make a Cake with Zebra Stripes on the Inside! »