We are so excited to share a brand new scratch Devil's Food Cake recipe with you, complete with a raspberry and ganache filling and raspberry buttercream frosting.

The combination of rich chocolate cake with refreshing raspberry flavor is divine!

Much like our scratch Classic Chocolate Cake, this Devil's Food Cake is ultra moist and filled with chocolatey goodness.

Reverse Creaming Method and Buttermilk Give this Cake Wonderful Texture!

Although our Devil's Food Cake recipe calls for the traditional mixing method, the resulting cake reminds me of cakes that use the reverse creaming method, as it has a velvety, melt-in-your-mouth quality.

We've also added melted chocolate to the recipe, in addition to unsweetened cocoa, which lends a decadent flavor and deep color.

Raspberry Buttercream is a new recipe for us, and it complements the devil's food cake perfectly!

As you'll notice in the recipe, we used a raspberry puree in our frosting recipe as well as for a simple glaze in between the cake layers.

The most time consuming part of the puree is straining out the raspberry seeds. If you are short on time, you can use seedless raspberry preserves instead, although you'll likely want to add a touch of pink coloring gel.

Now for the fun part...assembly!

How to Make a Devil's Food Cake with Raspberry Filling: Assembly

We piped a dam of buttercream on the first layer of Devil's Food Cake, followed by a thin glaze of raspberry puree. 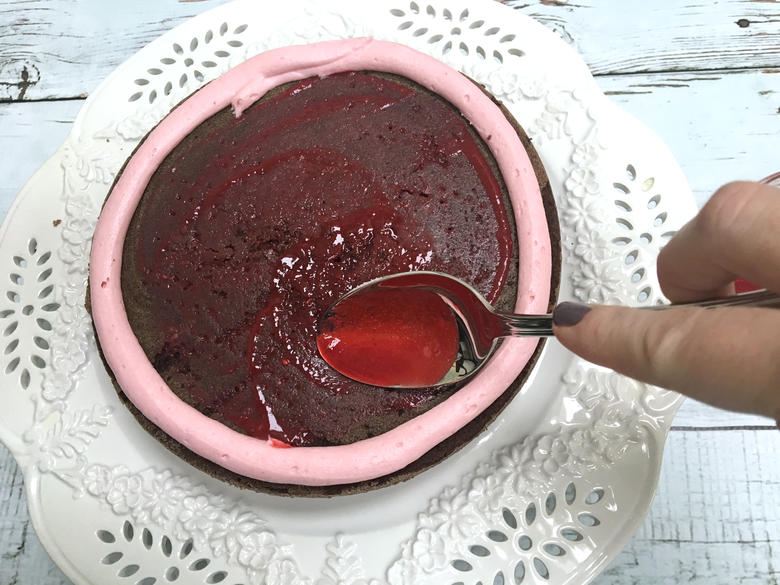 Next, we spread on a thin layer of ganache... 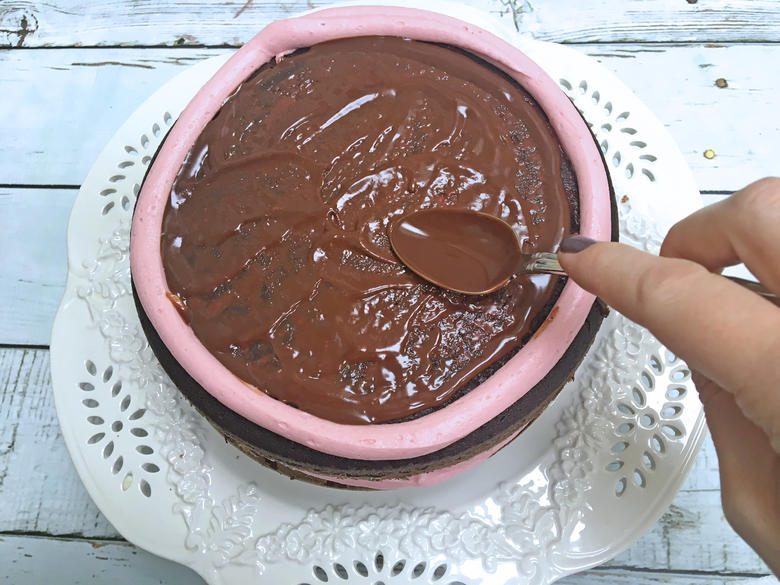 We followed up with a layer of raspberry frosting. (I find it's easier to pipe on and smooth the raspberry buttercream filling since we're layering it on top of the ganache filling.) 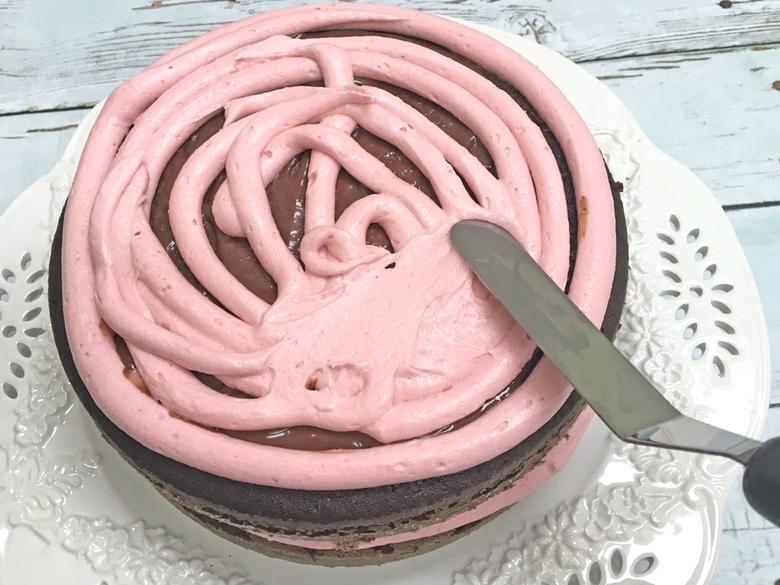 Repeat the steps for the second layer, and then finish with the top layer and a coat of raspberry buttercream!

When I frost my cakes, I like to do a thin crumb coat of frosting first. Then, I chill it in the freezer for about 10-15 minutes. I like to firm things up a bit before going back in with the final coat of frosting.

I smoothed the frosting as usual with a bench scraper (a spatula works too), and then went back over with my small, tapered offset spatula and applied it lightly to the frosting as I spun the cake on a turntable.

I moved the spatula slightly up and down as I worked my way around the cake. I love textured buttercream designs and this wavy texture is so unique (and so forgiving)!

To finish things off, I piped a simple shell border around the base of the cake using a tip 21. 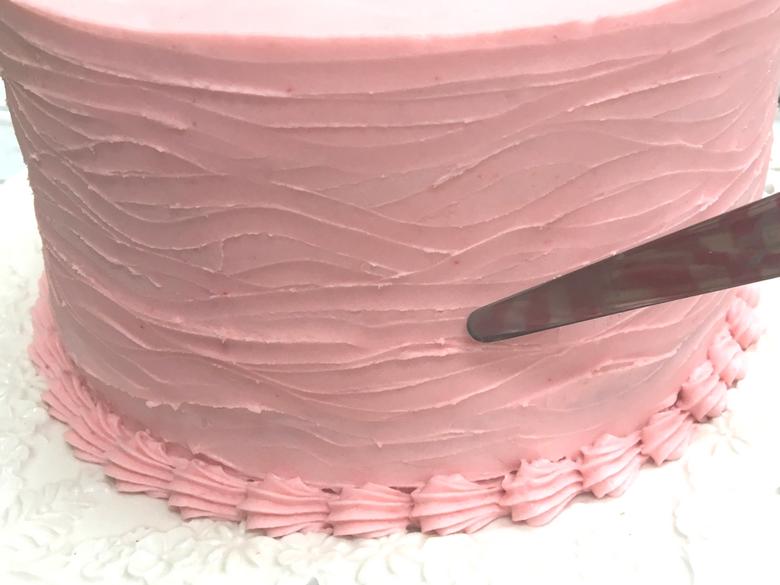 As a final touch, we added a simple ganache drip, a crisscross pattern of ganache over the top (piped through a disposable piping bag with the tip snipped away), and a buttercream border using a french tip 869.

Fresh raspberries was the final touch and I just love the look!

…and so many more! You can find a full roundup here: Favorite Chocolate Cake Recipes! 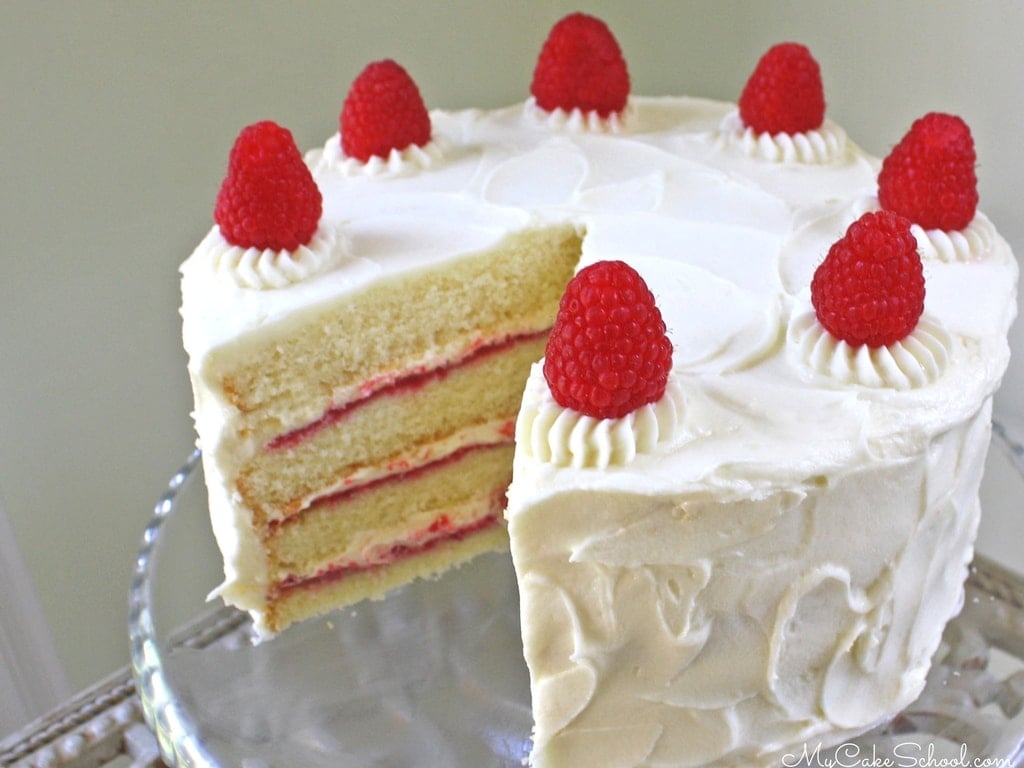 For the Devil's Food Cake

For the Raspberry Buttercream

For the Devil's Food Cake

Preheat the oven to 350 degrees

Grease and flour three 8 inch cake pans, add a wax paper or parchment paper circle to the bottom of each pan

Microwave the coarsely chopped chocolate for 30 seconds, let sit for a couple of minutes, stir, then microwave another 20 seconds.

Once you are sure the chocolate is melted, add the sifted cocoa and blend, then the buttermilk and oil, blend. A large 4 cup measuring cup is a good choice for holding this amount and for pouring. Set aside

In a separate bowl, add the flour, baking soda, baking powder and salt. Whisk for at least 30 seconds to blend. Set aside.

Add the softened butter to the mixing bowl and mix until smooth. Gradually add sugar and mix at medium speed 3 to 5 minutes until light and fluffy. Scrape the side and bottom of bowl.

Add eggs one at a time, mixing after each egg just until the yellow of the yolk disappears. Scrape the sides and bottom of bowl as needed.

Mixing no higher than medium speed alternately add the flour mixture and liquid mixture to the bowl, beginning and ending with the dry ingredients (3 additions of dry and 2 of liquid.

Pour into 3 prepared pans. Bake at 350 degrees for 25 to 30 minutes (test at 25 min.). The cakes are done when a toothpick inserted into the center comes out clean or with just a few crumbs attached.

For the Raspberry Buttercream Frosting

Press the raspberries through the strainer with the back of a spoon. It is thick so you will need to scrape the puree off the back of the strainer. You will use this for the buttercream recipe as well as for lightly glazing the cake layers.

In a separate bowl, cream the softened butter until smooth.

Continue mixing on medium speed another 3 to 4 minutes (longer if using a hand mixer), scraping the sides and bottom of the bowl occasionally. Slow the mixer down (#2 on a KitchenAid) and mix another minute, this will help to eliminate air pockets. If the buttercream is too thin add more powdered sugar, too thick, add more puree or a bit of milk.

*NOTE: If using Seedless Raspberry Preserves, instead of frozen raspberries the color will not be as pink so add a bit of pink gel coloring (we use AmeriColor Deep Pink). We added the color using a toothpick to control the amount. The amount of preserves will be the same as the frozen raspberry puree

Place your chocolate into a microwave safe bowl.

Pour heavy cream over the chocolate and place in the microwave for 1 minute. (Times may vary, see our note below).

Remove and allow to sit for one minute.

Gently stir and press chips to aid in melting. If there are still unmelted chips, microwave for 5-10 seconds. Stir and repeat as necessary. Be very careful not to overheat.

*Microwave times may vary. If you are making a smaller amount of ganache, you should reduce the microwave time. If your chocolate hasn't melted after the recommended amount of time, simply microwave in small 5-10 second increments until it has nearly completely melted. Let sit one minute, then stir until smooth

I piped a raspberry buttercream dam around the edge of the first layer of cake (about ¼ inch from the edge) using a disposable piping bag with the tip snipped away.

Next, I piped on raspberry buttercream and spread it with a spatula.

Repeat these steps for the next layer of cake.

Top with the third layer of cake and frost with raspberry buttercream. (Before frosting, my layers were sliding a bit and so I chilled it in the freezer for 10 minutes to firm things up.)

After frosting the cake, I loaded a disposable piping bag with ganache, snipped away the tip, and created a ganache drip around the top edge of the cake as I rotated it on my turntable.

I then piped a quick ganache pattern over the top, and piped raspberry buttercream around the edge of the cake using a french tip 869.

I topped every other piped star with raspberries.

We hope that you enjoy this recipe! No matter what you pair with this Devil's Food Cake, you are going to LOVE it, but we highly recommend going the raspberry and chocolate route at least once!
My husband who claimed not to be a fan of chocolate and fruit fillings has now declared this his new favorite! He tends to declare most of our cake recipes his new favorite, but if the rate that this cake disappeared is any indication, I'd say it's a keeper!

Don’t miss our full collection of tried and true Cake and Frosting recipes in our Recipes Section!
If you are interested in learning more about cake decorating, make sure to check out the hundreds of cake decorating video tutorials that we've made over the years! You can find them here: Free Cake Decorating Videos
Finally, if you are on Facebook, make sure to check out our Facebook Group! We’d love for you to pop in with your cake questions, cake advice, or to share your cake creations! My Cake School Facebook Group
We have a Pinterest Group as well! Follow along as we pin our favorite cakes, cake decorating ideas, and more.